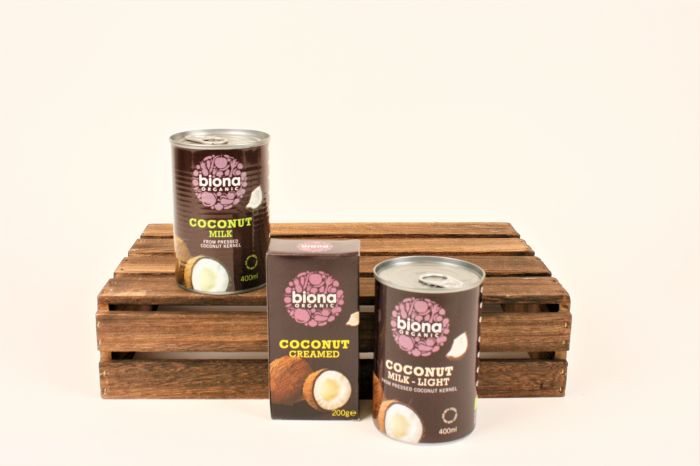 We're often being asked questions about coconut, so we've put together a FAQ to help!

It goes without saying that we're pretty proud of our Curry Packs and how awesome they taste; but most of our kits aren't complete without the addition of some extra, fresh ingredients.

We know that there's plenty of coconut milk and creamed coconut products out there nowadays, however, we choose to stock brands that truly complement our curries, like Biona ensuring that, ultimately, the end result is a better tasting dish!

How is coconut milk made?

The process of making both coconut milk and creamed coconut is quite simple; the coconut flesh (which is sometimes referred to as the coconut “meat”) is grated, followed by soaking in hot water; during this process, the coconut cream will rise to the top and is skimmed off, similar to dairy cream. The liquid which remains is poured through a cheesecloth and squeezed, resulting in coconut milk!

What is the difference between coconut milk and creamed coconut?

We often find that some of our customers are pretty unfamiliar with creamed coconut when their recipe calls for it. Regularly we're asked if it can be replaced with coconut milk; now, we can't stop you, however, the dish you produce will have a different texture and taste to the one expected. Let us explain why...

Creamed coconut is made up of both the coconut flesh and oils which makes for a thicker consistency and adds more texture when used in curries such as our Korma, Tikka Masala and Rogan Josh recipes. When cutting your block of creamed coconut (pictured below), we recommend slicing it lengthways for an even blend of both coconut flesh and oils - as you'll see in the image below, there is a clear separation between the oils and flesh in the packaging, this is natural, don't worry!

Coconut milk is a blend of coconut and water; we stock both coconut milk and light coconut milk. The difference between the two is that the light version simply contains less coconut flesh. The addition of coconut milk to a curry will result in a thinner, lighter texture which is perfect for our Goan Green, Mulligatanni and the Thai range.

Essentially, all you need to remember is:

Coconut milk = a thinner curry with a lighter texture

What are the health benefits of coconut milk?

Well, we aren't scientists! But we've done a little bit of research and we discovered that coconuts contain lauric acid, which is said to be easily absorbed and used as energy in the body; it can also be converted into a compound called monolaurin, which apparently has antibacterial properties! We say, bring on the coconuts!

As we mentioned earlier, we currently stock Biona coconut milk. We like Biona because it's made from certified organic coconuts and gives our dishes a rich, sweet and silky finish. It doesn’t contain any artificial stabilisers or additives; which is always a bonus! By choosing to pair your much-loved Curry Pack with a high-quality coconut milk means there is no compromise on flavour. Win, win!

All this talk of coconut milk is making us hungry…