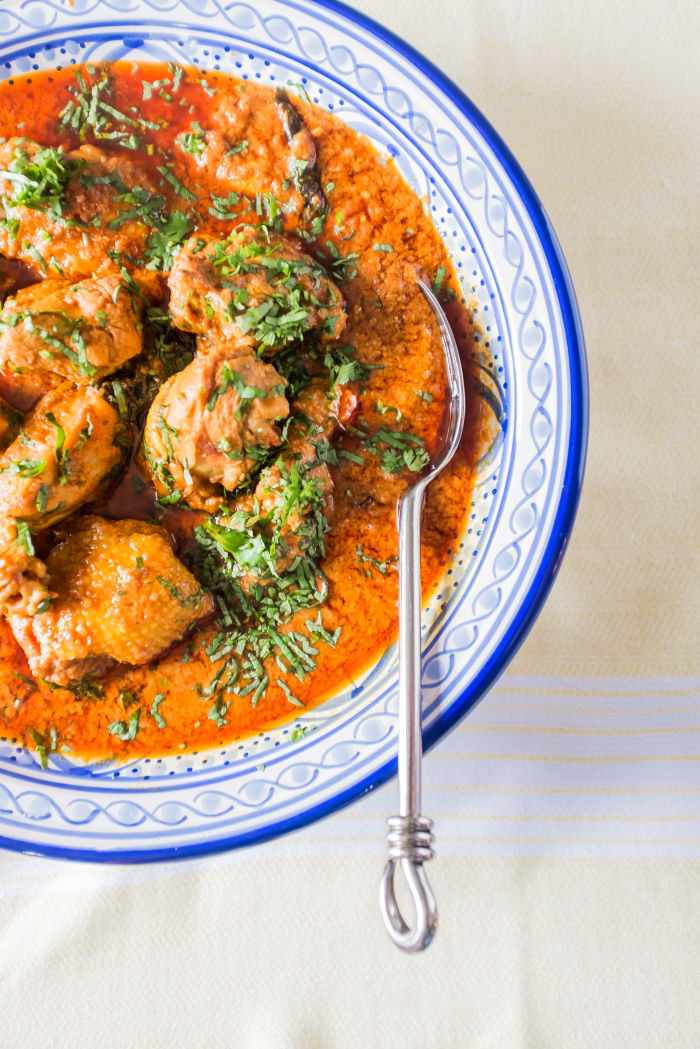 "Price doesn't determine how tasty a cut of meat will be. Generally, I prefer a cheaper cut of meat as it will have a better meat/fat ratio and this allows the meat to be much more tender after a slow cook.

Chicken - always thighs, preferably on the bone, but without is also good. These do not need very long to cook, 20 - 30 mins (longer if on the bone), as with overcooking it can become stringy and lacking texture.

Lamb - my preferred curry. I always try to use shoulder, as it has better level of fat and flavour. I often buy a whole piece and chop it up, but a good butcher will do it on request. I like to keep the pieces quite big, a good 5cm cube to avoid it breaking up. I cook it in the oven, preparing the sauce as normal - maybe with a little less water to make it thicker than usual - then add the meat, stir, cover and cook at 130 degrees for a couple of hours. If you then leave it overnight in the fridge you can remove any excess fat before reheating.

Another good cut is neck fillet, however it is a bit more expensive and can easily break up as the fat is more marbled than the shoulder. I would avoid leg as it is too lean and can dry out.

I have also made lamb koftas from mince, using our Kebab Masala, and then dropped them (raw) into a rich sauce (Korma or Pasanda) and slow cook.

Beef - You can cook beef using the exact same methods as you do with Lamb. Large pieces of a good braising steak is good for the Kashmiri Curry Pack . Slow cooked in the method above.

Another interesting cut is shin, it has a different texture but does become tender if cooked slowly. I have curried short ribs which are amazing but not to everyone's liking.

Of course minced beef is a family favourite and should be tried at least once. The only tip with mince would be to get the sauce thick and then on a high heat add the mince and stir it vigorously to break up the texture. I then transfer to the oven for a slow cook (1 hour). Keema Madras really can't be beaten for flavour and versatility.

Another option especially with the Malay Rendang is to thinly slice a sirloin steak across the grain and flash cook it in the hot sauce, leaving the meat pink so as not to dry it out.

Pork - not so popular but should also be given a try particularly in the Vindaloo. Shoulder is again good, but the favourite has to be belly. Remove the skin and cut in large dice and slow cook as above.

Other - For other meats such as mutton or goat treat the same as lamb.

Other poultry - game birds (quail, partridge) - treat as chicken. Rafi used to make a Pheasant Pickle which was incredible, slow cooked in a tangy sauce similar to Vindaloo.

Game such as venison, I would treat the same as beef."

So, there you have it; wise words from an expert chef. Please feel free to share your tips with us on our Facebook or Instagram pages; we always love to hear from our customers!