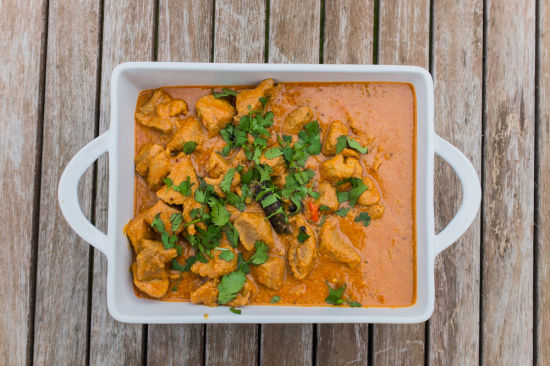 Goa is a tiny state in India (in comparison to many other Indian states at least!), and is known for its stunning beaches, sunny weather and top-class food. For such a small section of India, the huge quantity of delicious food it is responsible for is incredible.

Goan cuisine is a beautiful and unique variant on other Indian cuisines, having been influenced by three different religions (Hinduism, Islam and Christianity), as well as being a Portuguese colony for more than four centuries. Almost every dish in Goa includes coconut in some form, be it the milk, flesh, oil or sap. Vinegar and chillies also feature prominently, due to the Portuguese influence - did you know it was the Portuguese that helped introduce chillies to India, after discovering them in South America?!

We have two Goan dishes on our menu, the Xacutti and the Vindaloo. The Vindaloo was a featured curry a few months ago (see all our tasty tips here). Meanwhile, the Xacutti is at least half of the staff’s favourite (closely followed by the Ma’s Paretal and the Madras). With coconut, ginger, garlic and vinegar, it’s a unique blend of flavours and textures that works well with chicken or with pork belly for a real treat.

Our recipe is inspired by Brij Fernandes, a taxi driver who Rafi befriended whilst in Goa. We combine the best Goan ingredients such as creamed coconut (combining the flesh and oil), cinnamon, cloves and vinegar (we suggest cider), to give this dish real authenticity.

Goan curries tend to be served with plain rice or naan and, unlike in the rest of India, they are regularly accompanied by home-grown wine. Dry or medium-dry white wine is perfect with a Xacutti. Sounds like a pretty perfect excuse for a night in to me!