Posted on Monday, 3rd February 2020 by Dana in Top Tips 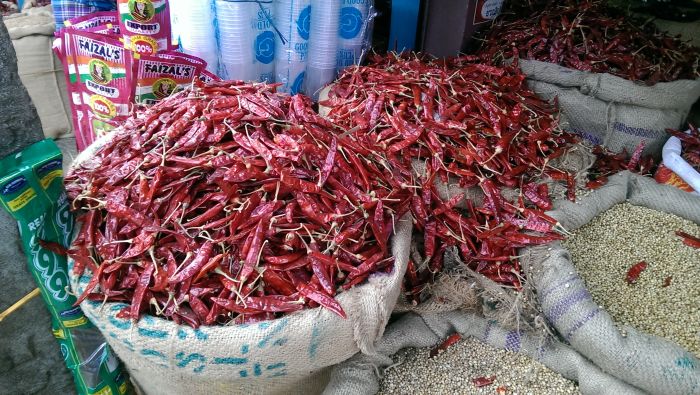 Both groups have their taboos: Kashmiri Pandits are not allowed to have beef while Kashmiri Muslims refrain from pork. Add to this the fact that Kashmiri Pandits avoid the use of garlic and onion (which is why the use of asafoetida is integral to their recipes), while Muslims use garlic and use a kind of wild onion called Prantha, this means that Kashmir food is varied in the extreme. Perhaps the common ancient recipe for both communities is the kahwa; a flavoured green tea beverage tracing back to the 1st and 2nd centuries AD of the Kushan empire. Highly aromatic with saffron, cinnamon and cardamon.

In the fifteenth century Kashmir was invaded by the founder of the Mughal empire, Tamerlane, who brought with him 1,700 skilled woodcarvers, weavers, architects, calligraphers and cooks from Samarkand to the valley of Kashmir. The descendants of these cooks, the Wazas, are the master chefs of Kashmir.

The ultimate formal banquet in Kashmir is the royal Wazwan. Of its thirty-six courses, between fifteen and thirty can be preparations of meat, cooked overnight by the master chef, Vasta Waza, and his retinue of wazas. Guests are seated in groups of four and share the meal out of a large metal plate called the trami.

The meal begins with a ritual washing of hands at a basin called the tash-t-nari, which is taken around by attendants. Then the tramis arrive, heaped with rice, quartered by four seekh kababs and contains four pieces of methi korma, one tabak maaz, one safed murg, one zafrani murg, and the first few courses. Curd and chutney are served separately in small earthen pots. As each trami is completed, it is removed, and a new one brought in, until the dinner has run its course.

Now, even we can't imagine preparing a banquet of thirty-six courses (imagine the washing up!), but here is a sumptuous meal of Kashmiri dishes to make you feel like royalty.

Rogan Josh is the quintessential Kashimiri dish, with a rich creamy tomato sauce and just a hint of smokiness, it is traditionally served with goat or lamb, but is equally good with sweet potato and chickpeas. The etymology of the name is disputed with some claiming that it derives from the Persian word rogan which means clarified butter, and josh meaning heat. Others believe that it is named for the natural chilli dye called rattan jot, giving the dish its vivid red colour.

For the sides, we suggest one uniquely Rafi's innovation and a very traditional Kashmiri dish. Lee devised the Kashmiri Roasts Curry Pack to accompany a traditional roast dinner, but for this meal, we suggest coating a cauliflower before roasting, for a spicy little side that will be a family favourite in an instant. Dum Aloo is an integral part of the Wazwan, and consists of baby potatoes served in a rich, tangy sauce.

Don't forget to add a chapatti or two to finish of this illustrious spread; and if you come up with another 32 dishes to go with the four that we consider essential, don't forget to send pictures!