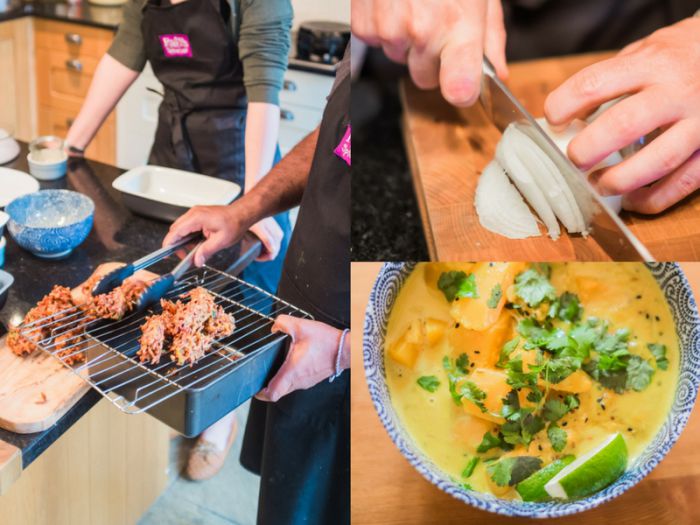 At the Spicebox we love to experiment with different ingredients to make dishes that are seasonal and super tasty. Here are a few smashing ideas from our team, to help you make the most of your cooking this autumn.

"The Sambhar is a particular favourite of mine and I always use butternut squash as I love the nutty flavour. I don't bother to peel the squash, just slice, remove the seeds, chop into fairly large pieces and add to the saucepan. It's a meal in itself, and a tasty lunch, but for a dinner I serve it with a few of our sides and a simple salad. For example, last week I served it with Gujarati Green Beans, onion Bhajias, a tomato salad and Piyaz Gobi, using leeks."

"I love the Kashmiri made with lamb neck fillet (trimmed of extra fat) and some potatoes or chick peas. I make it in the slow cooker. As it is a rich filling dish, I would serve it with simple chapatis, to mop up the sauce."

"A smoky Phaal with any winged game (partridge, pheasant etc.) is my favourite. I actually like it with rabbit too, though this doesn't go down well with some people! I think this curry is perfect for bonfire night as it is rich and comforting. The shooting season for these birds has started so (especially in Harrogate) we have lots of people asking for curries specifically for them. You often find that they shoot more than they can eat and so freeze them and then wonder what to do with them, curry is a perfect option!

Golden Pumpkin Curry is an obvious choice for Halloween, using up all those carved out pumpkins, but don't be afraid to use the massive array of different squashes that are available at this time of year. My fave is the Onion Squash. It is full of flavour. Chop it up into chunks, season with salt and pepper and roast before coating it with our Golden Pumpkin pack. Pumpkin tip - The smaller ones have more flavour!"

"Try making a Vindaloo (I like it medium-hot) with homemade beef meatballs. I just use Rafi’s Kebab Masala mix for the meatballs, which go perfectly with the rich tomato flavours of the sauce. For added texture, I like to add green peppers and mushrooms."

"Try using Romanesco instead of cauliflower for the Cauliflower with Panch Pooran. It’s the same family of vegetables, but with a crunchy, nuttier taste. They're in season and they look beautiful!"

"I like to make a Korma with roasted aubergine and red onions, as they go great with the aromatic flavours of the dish. I just roast them for 15-25 mins in the oven, on a medium heat, then they don't need too long in the sauce. As a side, my favourite is beetroot Bhajias (just using one pack of cooked beetroot, grated), they're lovely dipped in some raita."