All About Black Cardamon

Posted on Monday, 5th October 2020 by Dana in Top Tips 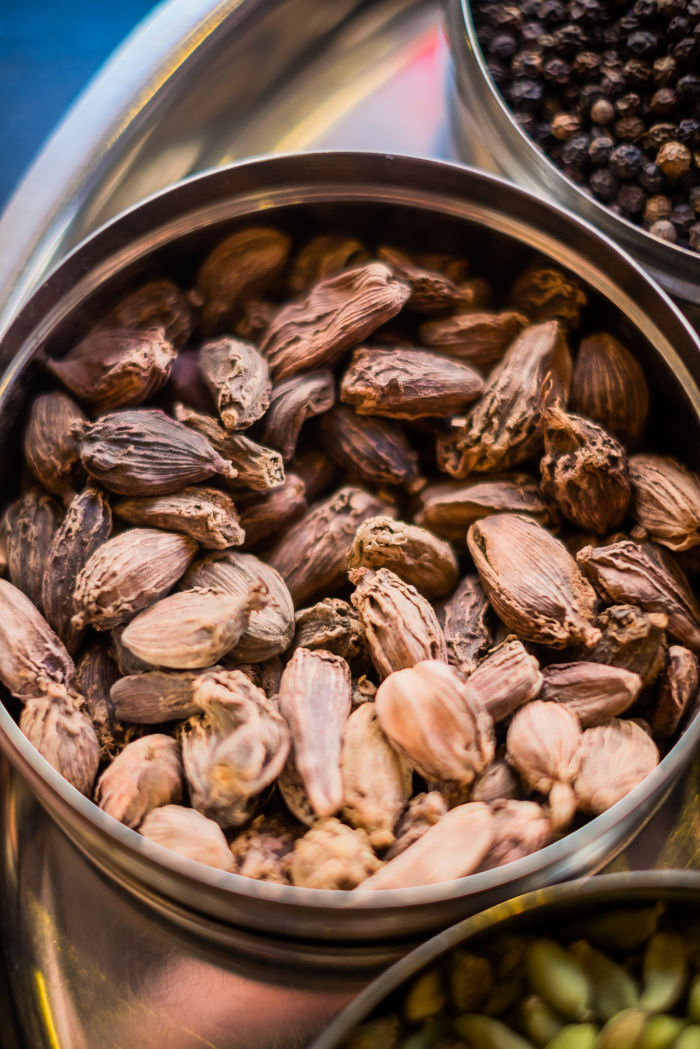 What is Black Cardamon?

Most people are familiar with the flavour of green cardamon; these little pods and seeds are used to flavour everything from toothpaste to tea, and they are valued as the world’s third most expensive spice. Wholesome and sweet, this versatile spice has a mysterious, smoky cousin that refuses to compromise: black cardamon.

Otherwise known as badi elaichi or kali elaichi, it is used in many of India's signature dishes. It is sold the form of seed pods, which are dark brown to black in colour and take on a smoky flavour due to the way they are dried. Black cardamon's scientific name is Amomum Subulatum. It grows in pods on an herbaceous plant belonging to the Zingiberaceae (ginger) family. The pods have a tough, dried, wrinkly skin, are roughly one inch in length, and house small, sticky, dark-coloured seeds. Black cardamon has a pungent aroma with a citrus and eucalyptus flavour.

There are at least two species of black cardamon: amomum subulatum and amomum tsao-ko. The type used in Indian cuisine is amomum subulatum, which is smaller than the amomum tsao-ko version, the black cardamon used in Chinese cooking. Several species of the genus Amomum are distributed all over the mountainous area from the Himalayas to Southern China. The main production regions are Eastern Nepal, India, and Bhutan. More than 50 percent of the world’s harvest is produced in India. There is also an African variety called Afra­momum found in Mada­gascar, Somalia, and Cameroon, and an­other pungent form in West Africa called grains of para­dise, which has a similar taste and appears sporadically in the Western market.

What is the Difference Between Black Cardamon and Green Cardamom?

There are two main types of cardamon: black and green. Green cardamon pods come from the Elettaria cardamonum plant and are harvested before they mature, while black pods are picked much later and then dried over a fire. In recipes, black cardamon should not be used if a recipe calls for green cardamon as the two pods have extremely different taste profiles. (Green can be used in place of black, but the signature smokiness will be absent.) Whereas green cardamon contributes a subtle, delicate taste to dishes, black cardamon packs a punch. Unlike green cardamon, which is a popular Scandinavian ingredient, the black variety of this spice is rarely used in sweet dishes due to its strong smoky and menthol flavours.

Black cardamon is dried over an open fire creating a distinct smoky aroma and flavour. This spice also has notes of resin and camphor, as well as menthol, a slightly minty aroma that provides balance to an otherwise funky flavour. These intense, heady notes put black cardamon in the "warming" spice category, along with black pepper, cloves, and chillies.

The black cardamon pods are mostly used whole and tempered to cause it to fully release its flavours and aroma. Before adding to a dish, the pods can also be crushed slightly to reveal the seed. If a recipe calls for black cardamon powder, remove and discard the skin, grind the seeds in a clean, dry coffee grinder, and use immediately. You can also grind the whole pod and strain through a colander to remove the outer skin. The black cardamon pods benefit from long, slow cooking times, and work well with other strong-flavoured spices. If using ground, a little goes a long way, so the spice should be used sparingly.